Elisa Montessori is an Italian artist working in both drawing and painting. Her work has been inspired by literature and poetry and her paintings are on display in several Italian museums. She was born in Genoa on 18 June 1931. She has been living and working in Trastevere in Rome since the mid-1950s, where she owns a studio.

She has been interested in drawing since childhood. She studied classical subjects and graduated with a humanities degree in 1953 from La Sapienza University in Rome. After graduation, she was trained at Mirko Basaldella’s studio where she met with the Gruppo Origine – Ettore Colla, Alberto Burri, and Giuseppe Capogrossi – who promoted a return to simple form and colour in abstract art. With Basaldella she started experimenting with different techniques.

In 1955 Montessori won a student grant to go to Paris, but decided to stay in Rome after her meeting with scientist Mario Tchou, who became her husband the same year. Montessori and Tchou moved to Milan and had two daughters. Following Tchou’s premature death of Tchou in 1961, Montessori relocated to Rome.

Montessori’s work is multifaceted, using many different techniques. One important aspect of her production starting from the 1980s was the role of the illustration and the relationship between image and text in both poetry and literature. She produced works inspired by the work of Shakespeare, Sylvia Plath, Patrizia Valduga, Emily Dickinson, Marianne Moore, Ingeborg Bachmann and Laura Lilli.

In the conversation with Valentina Perosa, she talks about her childhood, the meaning and sense of art and the issues Europe has to face in the future.

Elisa Montessori was interviewed by Valentina Perosa, a doctor and researcher specialising in neurology.

About Genoa as her hometown

I have very strong memories of Genoa. I greatly remember, for example, strangely enough, the Genoese dialect and the walks that my father and mother would make me take on Sundays. […] They always took us to one part of Nervi [east of Genoa] and in Pegli to the other side [west of Genoa], and these places were much more open and free in the sense that there were the seafronts there. Whereas when I went to the sea in Genoa, I often went with my Dad, and the houses at the time were practically along the shore and there were few cabins. The sand was dark; it wasn’t the typical summer sand, with beach umbrellas. I have a memory of water splashing and me putting little boats into the sea and watching them go out and return. I still feel intensely the odour of the sea, an odour tied strongly to the saltiness and the wind.

On growing up in poverty

[Growing up in poverty] was very significant for me because I have had to face some very dramatic losses in my life and my first instinct has always been to ask what are we going to eat tomorrow, what do we need to do tomorrow, and what is really necessary to survive? Because survival was the sign; the pain would remain forever, but one always needs to remember that survival is the most important thing, and I did not notice this much in other people. In that scary year I didn’t attend school, but I had the incredible luck to know a displaced woman who lived quite close by, a two-hour walk. In the snow the two hours could become even longer. She had brought with her all the books she owned. She used an acetylene lamp made of two bowls, one with stones and the other with water, which, drop by drop, produced a bluish gas that gave off light. With the help of this acetylene lamp I read all the Russians, I read everything that one could read. My mother let me read because I had to go to bed after a glass of milk and some chestnuts—it wasn’t exactly fun.

But I read and I read everything. And I was also lucky that she had quite a few contemporary and modern books. This lady wasn’t exactly an intellectual, she was a teacher, but she had a wonderful library. I read everything I could get my hands on, going a step up in quality. For example, first I would read what my mother was reading, those books published by Medusa. Not exactly sentimental romances, as my mother was an intelligent woman, but family stories. The Forsyte Saga, etc., those kinds of books. I on the other hand went up one level. Dostoyevsky, Gorky, Tolstoy. That is, I read all the most beautiful books on earth.

About her school time in the era of Mussolini

I did not attend the first year of primary school because I had already taught myself to read and write with the help of my dad. I did my second year of elementary school in Genoa and the first thing they taught us was “Viva il Duce”  [“Long live il Duce,” i.e., Mussolini]. We were in fact in that period where fascism was most flaunted – and then there was prayer. Therefore you could not infringe on this authority in any way. I evidently had a critical and rebellious character.

I ask myself why, why somebody had to impose this on me. I had a hard time, and sometimes I didn’t talk about these things. Sometimes I whispered because I felt these were impositions that I didn’t manage to understand.

The difference of seeing and knowing in art

Montessori: We lived in Lecce, where I attended my first and second year of middle school. It was very important because it was there that I realised that I could draw. At that time, in middle school, there was one hour of drawing.

I have this recollection: they took us to draw from real life—the branches of a peach tree, the trees in flower—and they gave us the usual Fabriano paper and a pencil. Afterwards we took them to the teacher’s desk and I saw that all the other drawings were different than mine, and mine were different than the others. But why? And I had a real revelation: they all drew what they knew, but I drew what I saw.

Perosa: Also what you felt, perhaps?

Montessori: No, no, what I saw. It was exactly the opposite. That is, seeing is not something that children are taught. Because when they say to a child, “Draw a flower”—in fact with my children I tried to do this—they draw a flower, but if you make them see a flower they don’t understand what they have to do. Many people, also adults, don’t know how to do it because they don’t have a sense of space. Space derives from the outlines of the leaf, and you have to frame your drawing in an outline, not completely or what you know, but the outline of the leaf. That is, you understand that a thing is different from the real thing but it has to mirror the rules of reality.

On art and utopia

In my generation we based our beliefs on utopias. I, in art, I always believed that ideology was something harmful. If, whatever you do, you do for an end, you shift your interest not onto something you know but onto something that you would like to be. Generally speaking, this derails. You have to be a star, you have to be Picasso to do a thing like that. If you don’t become like [Renato] Guttuso—who did some awful paintings. First he painted still-lifes, very beautiful. The style, however, has to be authentic, personal, subjective, struggling, and culturally against the current, not with the current, otherwise you will be devoured by the current, there is no remedy. This includes suffering, disillusion, repentance.  All this is unfortunately wrapped up in the creative act. But you can’t eliminate it. If you eliminate it you debase the culture. And the debasement of culture that is happening now is frightening.

On the role of art in the Italian society

Perosa: In your opinion, what is the role of art now in Italian society?

Montessori: It doesn’t exist any more, or so it seems. Hopefully there will be an underground current. Art has stopped being a thing of value, but instead has become a commercial commodity. It was the post-modern[ism] that ruined everything. And “Berlusconism.” There were such serious warning signs in Italy and today we are seeing the consequences. It is surely the same in your profession: it’s not important how good you are but important how to make a career.

On leaving boundaries behind

Yes, France, England. Mario [my husband] had a very elite position, and so I went from a regimen of, I won’t say poverty, but extreme frugality, to grand hotels, etc.  He had been very poor and it gave him pleasure to offer me these pleasantries. And then, look, with my grandfather I got to learn the big difference between Having and Power. First anti-fascism and absolute misery, then a ministerial car. I used to go to state ceremonies, to the most significant places, receptions. Once I went without socks, what a thing [laughs], or with sandals. I didn’t know a thing. And my grandfather didn’t care one bit.  “Are you dressed? Are you decent”? I didn’t have this bourgeois attitude, even though I knew that I had a different role in life. Entering a luxurious hotel with Mario did not impress me. I liked it, I enjoyed myself. 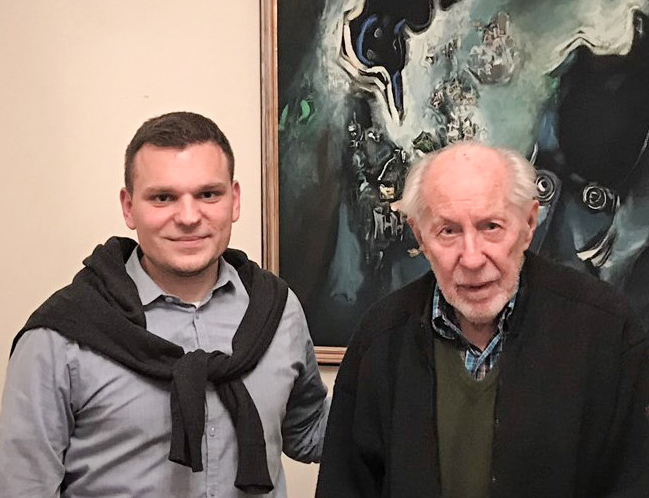